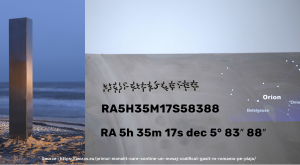 For almost a month the monoliths started appearing in remote places all over the world. Even though there has been a lot of theories, the second monolith discovered in Romania included a message written in Predator language.

We need astronomers help to find out with precision where the coordinates point to as the Orion Nebula, M42 Orion Constellation is actually a bit close to it having the coordinates of:RA 05h 35m 17s, dec. -05° 23′ 28″

M42 is the brightest nebula in the night sky and the only one that can be seen with the naked eye. With a casual glance below the three belt stars of Orion in a dark, light-pollution free sky, you’ll see this emission nebula as a small misty smudge. A pair of binoculars will begin to reveal its curving shape. With a small telescope, you will start to see some structure. In the heart of the Orion Nebula are four stars. These are part of the Trapezium open cluster, named because of the shape the four stars form. It’s the radiation from these stars that is energizing the entire nebula and causing it to glow.

Article translated from Romanian : The first monolith that contains a clue